Super Mario is back in town!!! 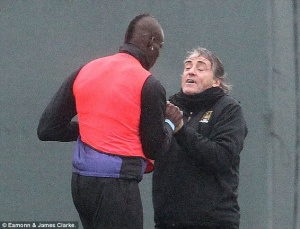 Pictured above is the horrific incident thought to be the reason that the bonkers Italian left the Premier League in the first place. During Man City training, he was ordered off the field by then manager Roberto Mancini for a bad tackle on Scott Sinclair. However, then Mario took a swipe at his own boss!

And off to Milan he went. After a great career at City where he won the Premier League (producing an assist to THAT MAN Aguero for THAT GOAL against QPR) and scoring 30 goals in 80 games, in January 2013, after 2 1/2 great years in Manchester, it was time for a change. In his year and a half at AC Milan,  he netted an incredible 30 goals in 54 games!

And it gets better! Italy. You may remember Euro 2012. Yes? Then think back to the Semi-Final. Italy v Germany. Surely Germany would win (football is a game of 22 players, but in the end, Germany always win)! However, a certain Balotelli popped up and scored two classic goals to send Italy through to the final. And then in June, in Brazil. He scored the winner against Engl… No, I can’t say it, it’s too painful!

Now let’s fly thousands of miles from Brazil to Liverpool. A crisis. They’d just lost their star man, their talisman, to Barcelona. They needed to replace Luis Suarez. With just Daniel Sturridge and Rickie Lambert up front, they would not have enough firepower to challenge for the title once again. A few weeks ago, Brendan Rodgers said cryptically that he was not going to sign our friend, Mario. Would he sign Wilfried Bony? No. Would he sign Karim Benzema? No. Would he sign Ramadel Falcao? No. Or would he sign Samuel Eto’o? No. About a week ago, it emerged Liverpool had renewed their interest in Mario Balotelli. Then it became clear that he flew into Manchester for a medical, and then flew back to Milan. On 22nd of August, the Liverpool boss said this:

We have quite an extensive code of conduct for players and staff. There is no specific one for any one individual. This isn’t like many clubs. Liverpool is a club that is a real strong family football club, with values and ethics that run over many years. I, as the manager, will fight to protect that always, so no matter which players or professionals are at the club, they will abide by that.

So he’s basically hinting that Balotelli would return to the Premier League. He then said:

But we understand that sometimes you have to take a risk with people. And a lot of the time, if you take that risk you can get a reward for it.

So without saying the word Balotelli, he said that Liverpool would be recruiting the madman!

Yesterday it was reported that he would probably be signing on Monday (tomorrow). This is too late for him to be eligible to make his debut against his old team, Manchester City (who Liverpool play on a Monday night at 8pm local time), but he may make his debut against Tottenham at White Hart Lane next weekend. However, his move has sparked questions about his discipline and just why Liverpool have a tendency to sign naughty strikers???

Former Liverpool defender Gary Gillespie believes the signing of Balotelli is a big risk for his old side.

His reputation does go before him. Brendan Rodgers, out of all the young managers today, would probably be the one to handle him better than most, but I do still think it’s a big gamble. 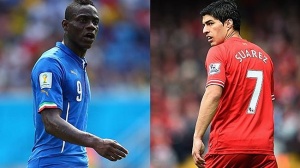 But is Balotelli a gamble worth taking? He’s a brilliant goalscorer and a great player for the Champions League, but may he cause unrest and unsettle Daniel Sturridge.

He adds depth to a Liverpool team, but also adds slight selfishness to a passing team. But £16,000,000 for a 24 year old quality striker is not too bad a deal…

As a Manchester City player, he launched fireworks from his bathroom window!

He scored with his shoulder against Norwich!