Recently there have been a lot of controversial decisions as to whether to send people off the pitch. But what remains unclear to the majority of football fans is: What makes a red card a red card? I’ve been finding it out…
First we need to be clear what we are dealing with. Fouls and misconducts. A fouls is something deemed by the referee to be against the football law. They result in a free kick or penalty. They can only be committed by a player on the pitch whilst the ball is in play. The foul can only be committed against an opposition player – striking a teammate, for example, is a misconduct. 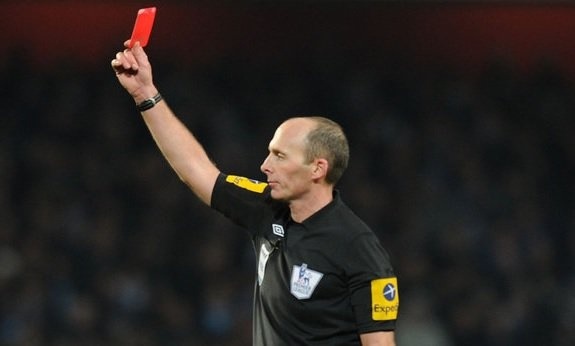 A misconduct is an action deemed by the referee to warrant a yellow or red card. A misconduct is a bit like the opposite of a foul – it an be committed by any player, at any time, no matter if it’s during a game or not. A misconduct can also be a foul. Also, ‘unsporting behaviour’ can result in a yellow card (as shown below). This infringement perhaps doesn’t appear in the rules of the game but is against the spirit of the game.

And the following would result in an indirect free kick:

When a goalkeeper, inside his own penalty area:

When any player in the opinion of the referee:

plays in a dangerous manner

impedes the progress of an opponent

prevents the goalkeeper from releasing the ball from his hands

But that is quite enough about fouls, let’s move on to the interesting part… Misconducts: 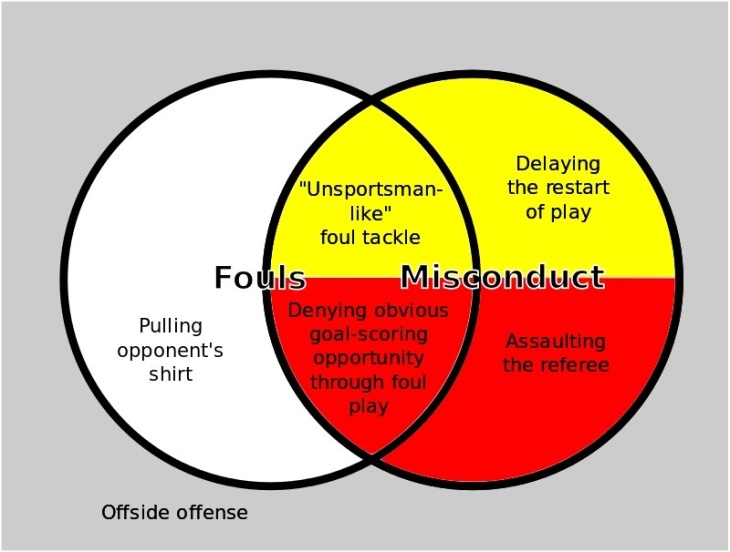 As I said earlier, a misconduct is an act by a player during play or before/after that results in a booking or sending off. Below is a list of things that would result in a yellow or red card and I will go into them in detail after:

A yellow card is given for:

Anything that can be deemed as unsporting behaviour;
Dissent by word or action;
Persistent infringement of the laws, for example, a series of fouls;
Delaying the restart of play;
Not retreating the required distance at a free-kick or corner;
Entering or re-entering the pitch without the referee’s permission;
Deliberately leaving the pitch without the referee’s permission;

And a red card is given for the following:

Serious foul play;
Violent conduct, such as throwing a punch;
Spitting at an opponent or another person;
A player other than the goalkeeper denying an obvious goalscoring opportunity by deliberately handling the ball;
Denying an obvious goalscoring opportunity to an opponent moving towards the player’s goal by an offence punishable by a free-kick or a penalty kick;
Using offensive or insulting or abusive language and/or gestures;
Receiving a second caution in the match;

I’ll start with the yellow cards. Firstly, the issue of unsporting behaviour. This could be a trip, or holding someone back, or a handball etc. Then we have dissent – pretty self-explanatory. Next – persistent fouling. That’s the bit where the ref points at every single one of those places where Mascherano has fouled someone and has had enough already! Delaying the start of play is by blocking off a free kick taker to stop them taking a quick free kick. Similar to that is not retreating the required distance. Finally we have the moving in and/or out of the pitch without asking the ref – basically, the referee is the boss, so don’t mess with him!

Now it gets tasty, and we’re on to the proper reason behind this post: the red cards.

Serious foul play – the professional foul. High boots, studs showing, two footed tackle etc – you know where that one’s going! Thats the big one that we’ll move on to later. Violent conduct is against the law of course. Spitting is also naturally not allowed… Eh, Johnny Evans?! Deliberate handball to deny a goal – again, no way Jose (Mourinho)! We don’t want players stealing the goalkeeper’s job, do we? Denying a goal scoring opportunity – basically when you are the last defender to tackle the striker and you bring him down. Abusive actions or words is pretty obvious. And, of course, yellow plus yellow equals red! A* in maths!

Serious foul play is not always as simple as it seems – look at this video from the recent Manchester derby:

That tackle is a case of serious foul play – its a high boot, studs showing an its a wild and dangerous tackle. However, Mark Clattenburg chose to give the Belgian centre back a caution instead of a dismissal. Why? Thanks to Jenna from Play The Adavantage who gave me these reasons:
1. Kompany was probably hurt as he clutched his thigh at the start of the tackle and then at half time went off injured.
2. He apologised after, knew he’d messed up at it wasn’t deliberate – however, it doesn’t have to be if the ref thinks it is dangerous play, that’s important.
3. Finally, he does actually get the ball!
She has plenty more things to say on the incident, so CLICK HERE!
What that decision proves is that there are many factors that come into the decision making for the referee and it is never easy to make the correct decision – what Mark Clattenburg did kept the derby at 11 v 11, but that shouldn’t have a bearing on his decision. Anyhow, referees have the ability to use their common sense and humane sense – they don’t have to stick by the rule books as they saw that Kompany was clearly in pain before he came flying in.

Also, Clattenburg spent a while consulting his assistant. That is good as it gives a range of opinions. My opinion is that on another day that would have been a blatant red card. Kompany was a very lucky boy, but I don’t think Clatts made a poor decision. And that is what I’ve found with many decisions – it could go either way. I believe that football is an entertaining sport that despite all the focus on money is still about the enjoyment factor. If the game can be kept at 11 v 11 it is better to watch so if there is a 50/50 call to make, please don’t produce a red card! 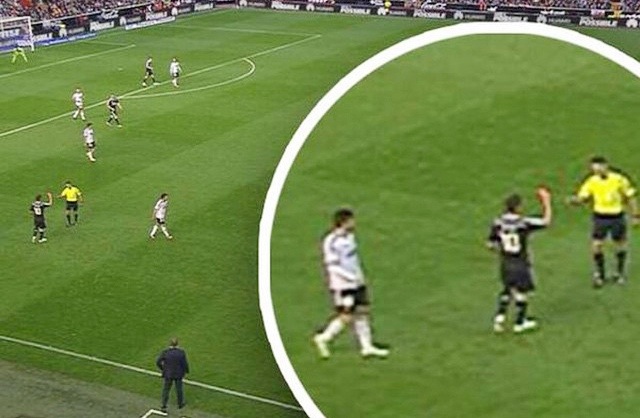 To be honest, I think the way that decisions are down to one man is a bit of a shambles. There should either be stricter guidelines as to just what is classified as a dismissal – OR they should bring in a video referee. But that’s for another post…

Red cards change games. And apparently there are many different ways to get one. But seemingly it isn’t quite as obvious as it at first looks. However, at the end of the day, if you get sent off, you’ve nearly always done something wrong – perhaps damaged the reputation of your team or even the game itself. But the FA can right the wrong decisions. You can appeal to have a red card overturned. And the FA can punish you where the referee didn’t. Whilst all this madness is going on in the referee’s headset, let Phil Dowd get stressed, and just sit back and enjoy the game. And try not to scream when Luis Suarez bites another person at the Camp Nou. It’s gonna happen some time soon…